Previous reports have largely linked Wanjiku's death to threats that she had been experiencing over her unpaid loans. Although, her relatives have dismissed the claims, maintaining that there was more than debts that led to her killing. 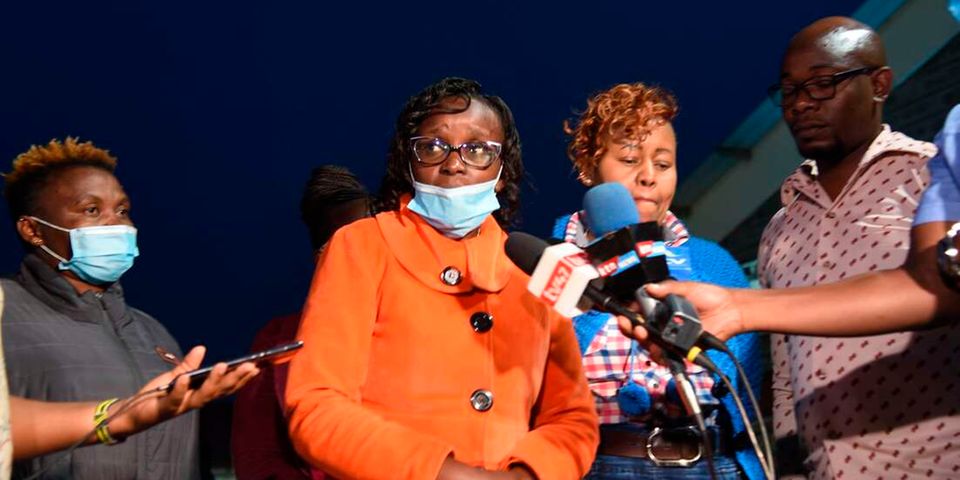 Wanjiku's sister in a press address on Wednesday evening after the late's postmortem. [Source/ Nation]

"She died out of head injuries after being hit at the forehead and the back. She also had bruises on her hip and her eyes were not gouged out as previously thought owing to it being partially decomposed...," stated Ms. Wanjiku's sister.

The postmortem was conducted by Dr. Charles Muturi, at the Kenyatta University Funeral parlor. The late was reportedly lured with boosting her Stima Sacco shares, after withdrawing Sh0.35 million from Co-operative Bank’s Stima Plaza on February 12, 2021.

Not smelling a rat, she went to meet one of her suspected abductors and former lover at Ngara. A day after, Ms. Wanjiku's car was found abandoned at  Gatina Primary School in Kawangware.

This led to the immediate arrests of four suspects among them her ex-boyfriend and three others. On February 15, 2021, bodaboda operators stumbled on a woman's corpse dumped in a thicket in Kajiado.

Law enforcers collected it and had it booked as that of an unidentified person at Kajiado Referral Hospital until it was successfully identified as Ms. Wanjiku's on February 19, 2021.

Her relatives described Wanjiku as an industrious woman who resigned from her banking job in 2016 to try her luck in real estate.

Speaking on her demise, one of her sisters stated that as a family they had decided to admit the reality of losing one of their own, but called justice to be administered fully.

Uhuru chaffered in new all-electric Jaguar SUV to the World...

Kanze Dena Reveals Reasons Behind The Rising Cost Of Living...