Baringo County Assembly Becomes the First to Vote Against BBI

BBI Bill requires at least 24 out of the 47 counties to vote in its favor, in order to sail to the next level. If passed, BBI will see the 2010 Consitution amended afresh. 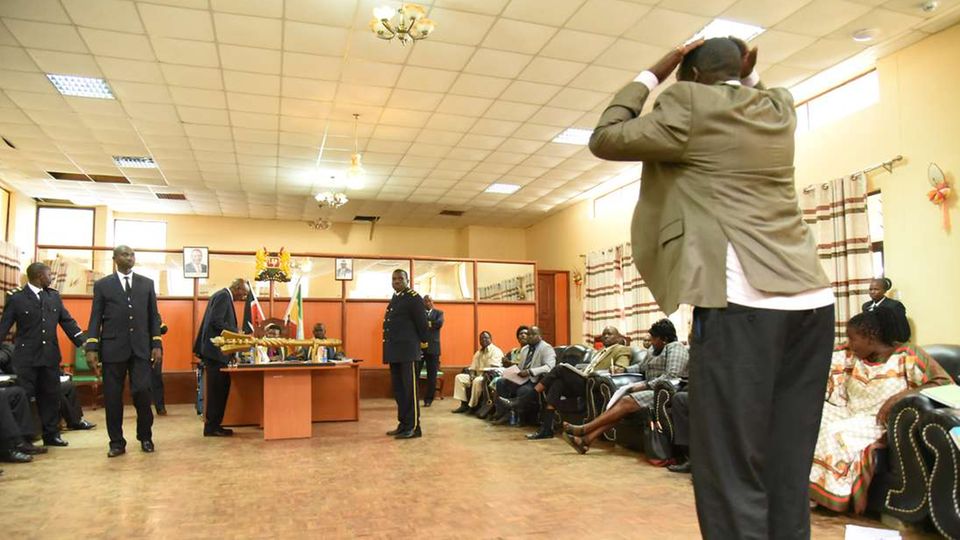 The situation at Baringo assembly on Thursday [yesterday]. [Photo/ Nation]

Feuds marred Baringo County Assembly on Thursday, as members debated on whether to pass the Building Bridges Initiative [BBI] or not.

However, Ward representatives went against all odds to vote 'No' for the Bill that has continued enjoying unwavering support by President Kenyatta and ex-Opposition leader Raila Odinga.

The consequences were dire following Bill's rejection, with law enforcers hurling teargas canisters to the legislators. Amazingly, 30 legislators allied to Jubilee voted against the Bill, while another 11 members associated with Kanu voted in support.

The house has a total of 45 members, with 32 being Jubilee members, two independent members, one ODM member, and 10 others who identify with Kanu.

Jubilee versus Kanu political antagonism was so evident during the session in efforts to tackle the Bill that had been brought to the house by the legal committee chair Charles Kosgei.

During the moving of the motion, Hon. Kosgei reportedly slapped his colleague from Karbanet Ward, after he tried to snatch a microphone from him.

The assembly sergeants-at-arms had to call police officers to intervene in the situation that had almost turned the assembly into a battlefield.

Normalcy resumed shortly helping the members to vote, but chaos erupted again during the announcing of the results after police teargassed members inside the chambers.

Assembly Speaker David Kiplagat hurriedly announced the results and adjourned all sittings until next Tuesday, before being whisked out of the house through the window.

Jubilee MCAs pointed an accusing finger to the County Commissioner who resolved to use law enforcers to intimidate members after they threatened not to be dictated on what to do with the Bill.

Close sources indicated how Jubilee had summoned about 31 MCAS warning them against failing to pass the Bill. Some 12 nominated MCAS were threatened with Job loss should they vote against the Bill.

The party [Jubilee] on Thursday openly stated that any Baringo MCA allied to it who attempts to reject the Bill will face it rough.

However, MCAS maintained that they will do according to the voters' will but not the party's will. Therefore, they vowed not to bow down to any intimidations formulated to threaten them in passing the motion.