Brazil recorded more than 4000 Deaths in the last 24 hours for the first time on Tuesday. The Health Ministry said the country reeled from a surge of infections that have made it the current epicenter of the pandemic. 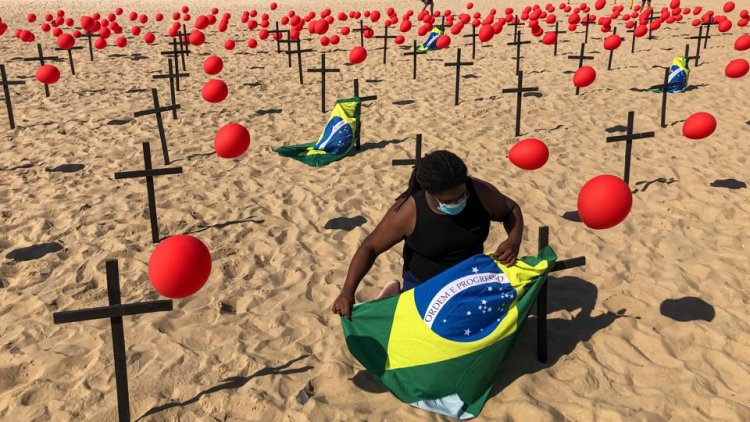 According to Covid-19 reports on Tuesday, Brazil registered more than 4000 deaths in the last 24 hours for the first time as a more contagious variant fuel a surge in cases.

Hospitals in Brazil are overcrowded with people dying as they wait in the lines in some cities and the health system is on the brink of collapse in many areas.

Brazil’s total death toll is currently nearly 337,000 becoming the second only to the United States.

The country’s health system is buckling under the strain of the latest virus wave which has forced health officials into agonizing decisions over which patient to give life-saving care and led cemeteries to hold overnight burials to deal with the crush of coffins.

"We're in a dreadful situation, and we're not seeing effective measures by either state or federal governments" to respond, said epidemiologist Ethel Maciel of Espirito Santo Federal University.

"At the rate we're vaccinating -- 10 percent of the population (with a first dose) so far -- the only way to slow the extremely fast spread of the virus is an effective lockdown for at least 20 days," she told AFP.

"Unfortunately, politics has brought us where we are today: This enormous number of people who have lost their lives, Very sad."

However, the health crisis in Brazil appears to be turning into a political one after President Bolsonaro who for a long time had flouted expert advice on containing the virus but now he is facing pressure from the Congress and Business Sector on how to contain the virus.

Brazil has a population of 212 million people and it has been recording an average of 2757 Covid-19 deaths a day for the past one week.

The government is however working hard to get the vaccines in order to reduce the rate of deaths.