Residents were rioting over a man who killed his fellow on Monday evening. They staged demos seeking to apprehend the killer before officers arrived in time for his rescue. 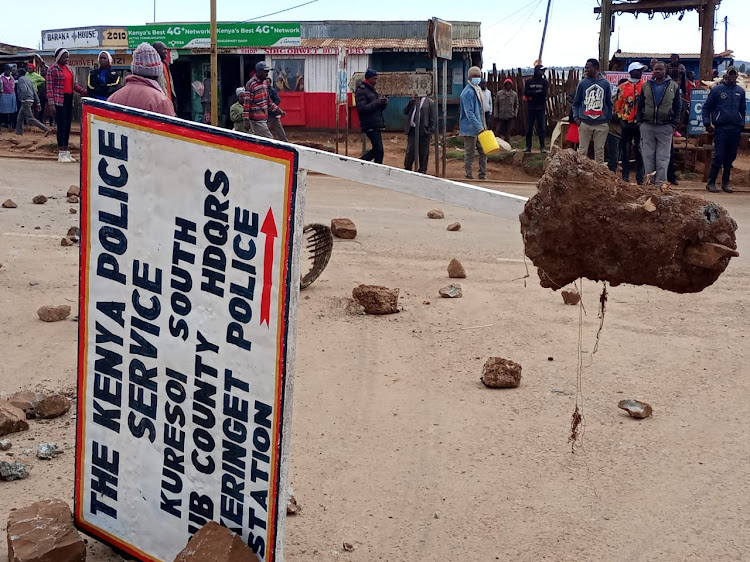 A signpost uprooted by the demonstrators. [Photo/ The Star]

Law enforcers at Keringet market were today forced to use teargas on demonstrators who had blocked the Olenguruone-Molo Road, seeking to lynch a man who reportedly killed his village mate on Monday night.

Troubled ensued after the villagers learnt that the killer suspect was sipping some alcohol inside one of the pubs at the market centre.

The suspect allegedly took away his colleague's life yesterday night. Officers had to hurl teargas canisters after the mob became uncontrollable and started throwing stones and lighting fires along the road.

The angry mob reportedly stoned the police van carrying the suspect while others uprooted a signpost belonging to Keringet Police Station.

According to the locals, officers had become reluctant in enforcing laws with alcohol sales even happening during the outlawed hours, since some pubs belong to the officers.

An eyewitness stated how the suspect was caught with blood-stained clothes before police officers rescued him from the angry mob thirsting for his blood.

Mother And Son Released From Murder Case After Serving...

Two People Die In A Borehole Accident In West Pokot

One Boy In The Strangulation Case Laid To Rest