Both Raila and DP Ruto have in the recent past been pointing an accusing finger at each other over how things were not working out in the government. 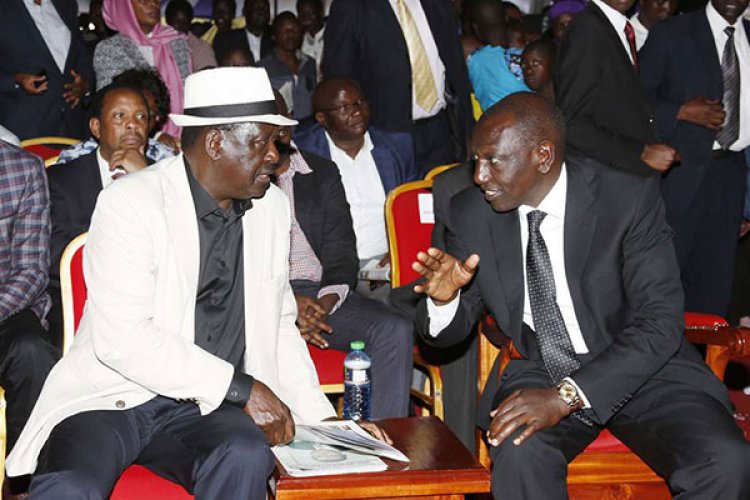 ODM leader Raila and DP Ruto in a past photo. [Source/ Weekly Citizen]

For the first occasion since 2021 begun, Deputy President William Ruto and Orange Democratic Movement [ODM] Raila Odinga are sitting under one tent at the ongoing send-off at Kisii.

The two are reportedly gracing the funeral for Mzee Abel Gongera who was the Kisii County Deputy Governor Joash Maangi's father.

With the two meeting each at a time when the political tension is reportedly high with chaos rocking some areas, officers have been deployed to man peace at the event.

Close sources indicated how mobilizations had been done by supporters from each side, a week before the burial. However, General Service Unit [GSU] and officers from other ranks are on standby to contain any situation.

The Building Bridges Initiative [BBI] campaigns are expected to form a better part of the speeches by various speakers at the send-off.

Speaking recently, Joash Maangi urged the attendants to maintain calmness during the burial of his father. And today in his tribute, Joash noted how his dad's burial had united various leaders.

The Deputy Governor added that since his father was a man who loved peace, his death should serve to unite all.

"I am grateful that this man lying here has brought together all these leaders. He was a great man who loved peace. Let his death unite us," Joash spoke of his father at the ongoing send-off.