The man who sells mutura along the streets of Kayole estate was busted by residents as he transported a gross site of fetuses belonging to strange animals on a motorbike.

A food vendor based in Nairobi was detained by an irate mob on Sunday, February 14 after being discovered ferrying fetuses which he intended to use to prepare delicacies for his customers.

The man who sells mutura along the streets of Kayole estate was busted by residents as he transported a gross site of fetuses belonging to strange animals on a motorbike.

The fetuses were spread out to the ground after residents forced the vendor to empty all the contents of his bag.

It was a shocking scene as residents who had mostly been his customers were bewildered in shock at the realization that they have been munching on rodents and dog meat popularly known as 'nyama soft soft'.

Bright Kenya News was unable to include the images of the man's contents due to their graphical nature.

The street vendor was lucky to escape with his life as the residents dragged him to the police station.

Most street food vendors are not trained on food safety and hygiene, and Kenyans have been warned against consuming street food which can lead to food poisoning and other foodborne illnesses.

Although studies on the safety of street foods have been carried out in most developing countries, not much has been done in Nairobi.

According to research done by the University of Nairobi on October 23, more than half of cooked or uncooked ‘mutura’ sold in the capital city was highly infected with disease-causing germs.

The university published a report which read in part, “Our study shows roasted and non-roasted African sausages sold in meat outlets in Nairobi County are contaminated with staphylococcus, Bacillus, Streptococcus, Proteus, and E Coli organisms.”

Street food thus acts as a vital socio-economic role by providing food and nutritional supports to the lower and middle-income people at a reasonably low price and is highly valued for the unique taste of its food items. 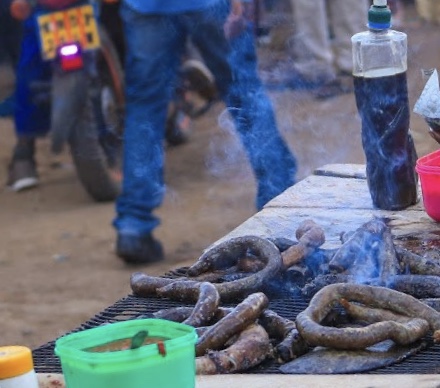