A number of politicians have in the past been caught up in sagas touching on fake certificates, which they acquired in attempts to ascend to political powers. 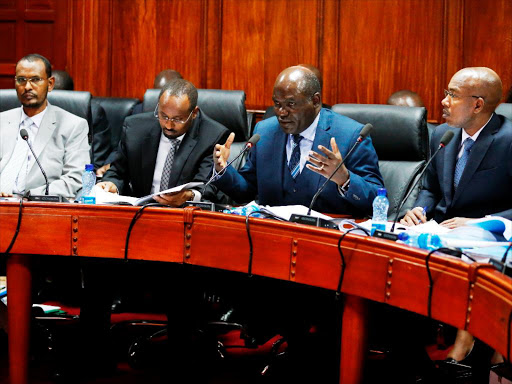 IEBC Chair Wafula in a past meeting. [Source/ The Star]

The Independence Electoral and Boundaries Commission [IEBC] has joined hands with the Kenya National Qualifications Authority [KNQA] in efforts to tame political leaders with dubious certificates.

The decision might sound doom to politicians who had hoped to ascend to power by using doom certificates to be cleared by IEBC for the 2022 elections.

With the collaboration between IEBC and KNQA, all politicians with certificates popularly known as 'River road certificates' may be leaving on a borrowed time in power as 2022 draws near.

IEBC Chair Wafula Chebukati has since sent an advance warning to politicians planning to cheat the system by presenting false documents.

Chebukati was hopeful that the teaming will help end the menace that has always surrounded the issue of fake certificates among politicians.

It has been a toll order for IEBC to weed out politicians with fake certificates since they could not get access to the national database containing genuine certificates' information.

KNQA chairman Kilemi Mwiria was also optimistic that the collaboration will restore sanity to the education system by ensuring that all scholars have genuine qualifications.

Some politicians have in the past found themselves on the receiving end after queries surrounding their academic qualifications were brought up.

An attempt to amend the constitutional section touching on academic qualifications by politicians was put on hold in 2017, with hopes that those affected will have sorted themselves before 2022.