Energy Cabinet Secretary Monica Juma has now said investigative teams are reviewing the integrity of the electricity transmission infrastructure in the country with a view to correcting anomalies that could have led to Tuesday’s nationwide blackout. 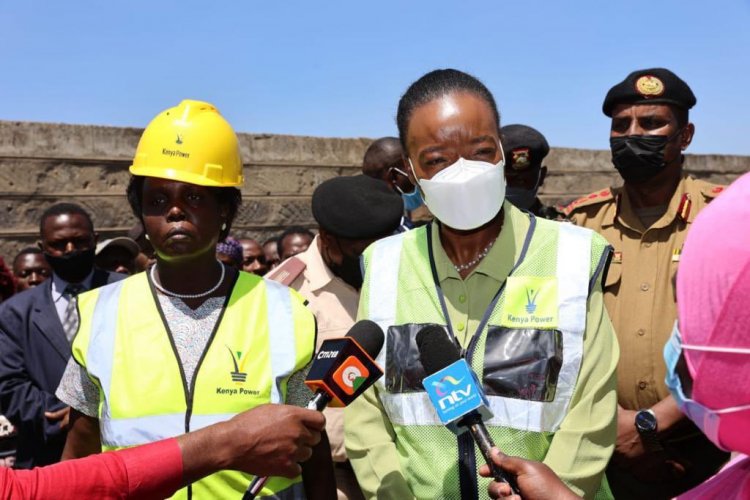 The CS on Thursday toured the scene of the collapsed electricity transmission towers in Nairobi, coming to terms with the encroachment of the way leave that she now says must be secured.

Three days after the collapse of four electricity towers in Imara Daima, Amb. Juma chose to see for herself, the extent of the damage.

It is believed that it’s because of the vandalism that the towers caved in on their weight.

A review of the transmission line shows extensive human activity on the ground. When the collapse occurred, over 200 students of Stevens High School were in class.

“At around 9:45 we heard some things on the roof and thought it was villagers fighting and throwing stones…we decided to peep through the window, then we saw that ballon and we were like ni stima imeanguka,” a teacher at the school told the CS.

The school has been in existence for seven years now. The management of the school says they were previously asked to shift their perimeter wall to move out of the way of electricity.

They did, but now the towers have fallen on them. The majority of the learners have been sent home until such a time when the danger has been eliminated.

“I will obviously be bringing the matter of the school to the attention of CS Magoha, I am sure he has ways of dealing with that,” said Amb. Juma.

“This is a way leave, so we are going to make sure that the way leave is developed to be protected because of the risk…when something like this happens, it can cause tragedy.”

Inside the Mukuru kwa Njenga settlement, residents are still in shock. While they acknowledge that the claimed vandals maybe members of their community, they apportion blame to security teams in the area.

VIDEO: Cameroon 4-1 Ethiopia -The Hosts are through to the Last 16 at AFCON