Kenya’s political landscape could be changed for another major realignment after it emerged that DP William Ruto met with the Council of Governors Chairman Wycliffe Oparanya. 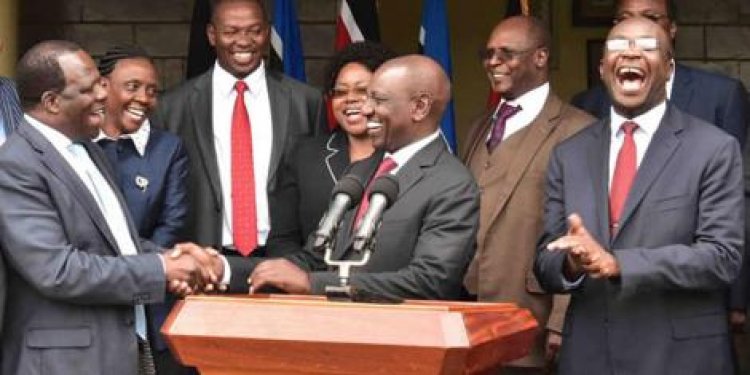 This news comes days after key regional leaders including the governors held meetings in the Nairobi hotel, therefore, triggering speculations that ODM leader Raila Odinga was building a new alliance.

The Kakamega Governor Wycliffe Oparanya being Raila’s second in command, meeting with Ruto swirled speculations of a looming political realignment.

However, it is not clear whether the former CoG was planning to ditch Raila as he was playing a major role in the party’s possible alliance with DP Ruto. There are claims that Oparanya's secret rapprochement with Deputy President William Ruto could have formed part of the agenda of a meeting by a key organ of the ODM party.

“The matter came up in one of our meetings but we did not give it a lot of weight. However, we have confirmed that Oparanya and Ruto are in talks,” said a high-ranking ODM official aware of the issue.

Oparanya however has dismissed the claims of a possible alliance with the Deputy President saying the pictures going around the social media are photos taken a long time ago.

“Those are very old photos of about three weeks ago and have nothing to do with any talks. When people meet in a hotel it doesn't translate into building an alliance,” Oparanya said on the phone.

“I am in ODM to stay unless Baba (Raila Odinga) moves out."

The news comes at a time when Raila and Ruto allies had started sending feelers that the two could work together ahead of the 2022 presidential elections in a bid to vanquish Uhuru’s succession politics.

Revealed! This is What Killed Politician Ibrahim Ahmed {Johnny}

Top Politicians Roped in a Recent Embu Accident That Killed...