Manchester United 3:1 Tottenham: Man U Are 11 Points Behind City

Manchester United demolished Tottenham`s hopes of making the Premier League`s top four as they came from behind to secure a fully deserved victory of 3-1. 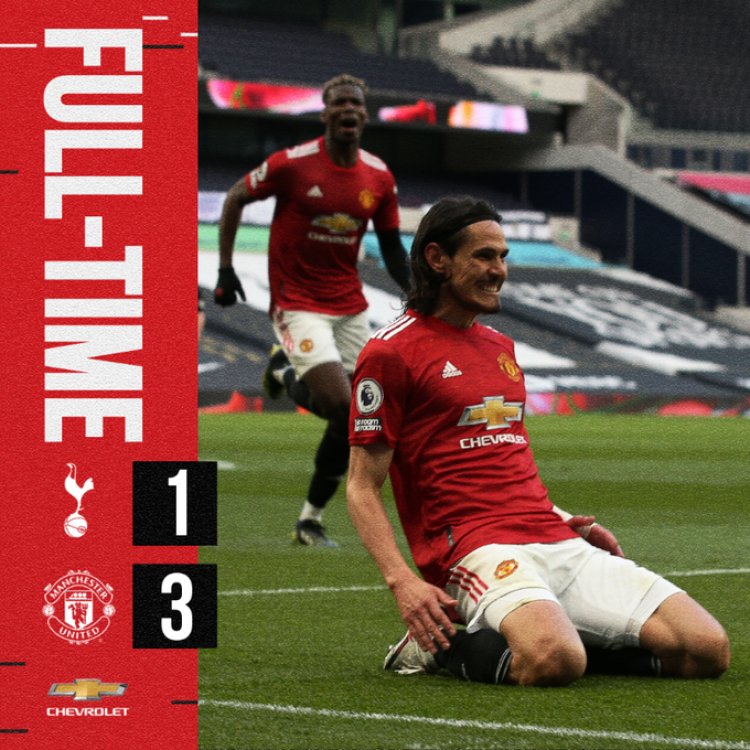 Tottenham went into this game knowing that victory would keep them in touch with the Champions League places but another low performance led to a merciless defeat. Edinson Cavani thought he had given United a first lead goal with an awesome finish from Pogba`s pass but the goal was ruled out by the referee following observation by Video Assistant Referee(VAR) after Scott Mc Tominay caught Son Heung-min with his trailing arm.

Tottenham gained confidence after Son put Tottenham ahead before the break but United recovered impressively with a win that leaves them 11 points behind leaders Man City with a game in hand.

After the break, Fred equalized the goal after 57 minutes giving United hope to win which went a long way to grant them confidence thus boosting their performance. Edison Cavani finally scored at the 79th minute after launching a shot from Mason Greenwood`s cross making it 2-1.

Mason Greenwood completed the scoring at the 96th minute as he provided a finish that was too powerful for Lloris at his near post making it a 3-1 performance.

Ronald Koeman: Messi Has Shown He Is The Best After Huesca...