For the one week, operations will remain stalled at the Meru court, with urgent cases being referred to nearby legal institutions. 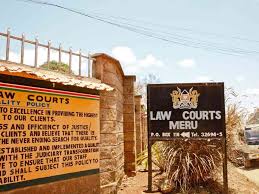 Meru law courts will remain closed for at least a week after one of its staff members succumbed to Covid-19 related illness.

Via a statement issued on Sunday evening by the Interim Chief Justice (CJ)  Ms. Philomena Mwilu, the shutdown was necessitated by the worker's death.

The late was reportedly serving at the Meru High Court's Civil Registry section, which has about 12 staff members.

"There is a high probability that there was general interaction with the affected person and justifiable apprehension as to the potential for exposure and the spread of the virus" hinted acting CJ Mwilu.

During the Monday morning meeting chaired by the Presiding Judge of the Meru High Court, the panelists agreed with Ms. Mwilu that the court premises should be declared shut for a while, with an immediate effect.

The closure is aimed at enabling mass testing among the staff members, in addition to the fumigation of the premises. Further, it will aid in self-isolation for the members who might have been infected in the course.

Ms. Mwilu further tendered her condolences to the family of the fallen staff.

Kadima Pleads Not Guilty To Killing City Lawyer in Syokimau