Whether the abduction and murder have a link to the court case remains unclear. Detectives are seeking to find out how the deceased's personal items reached their car before her disappearance. 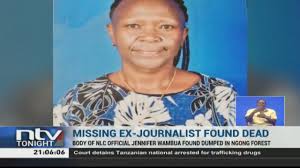 The NLC official whose corpse was found on March 15. [Photo/ Courtesy]

The late deputy Communication director for the National Land Commission (NLC) Ms. Jeniffer Wambua was reportedly set to appear before Milimani court, to testify in a scandal case that involved government officers.

Emerging details indicate that Ms. Wambua's appearance had been set for March 15 (Monday), the day her corpse was discovered at the City mortuary.

The late went missing on March 12, only to be found dead. Police sources indicated that the corpse collected within the Ngong area, a day after she disappeared (March 13)

She was reportedly a key witness in an embezzlement case for Sh122 million from the Government Advertising Agency (GAA).

Ms. Wambua's legal representative and Makueni legislator Daniel Maanzo recalled how the two were to meet on Saturday, as she prepared to stand in the court chambers on Monday.

However, that never happened as she went missing a day before they were to meet. On the day she went missing, her husband Joseph Komu dropped her at her Ardhi House office before he proceeded to his office in Kilimo House.

Komu had parked their family car in a nearby yard convenient for the duo since each had a key. Hours later, Komu returned only to find his wife's handbag and phone inside the car.

He decided to take them to his wife at the office, only to learn that she had not been seen for the better part of the day. The CCTV footage captured shows Ms. Wambua reporting to her office, and leaving an hour later carrying her handbag.

How the handbag found its way to the family's car is what detectives are seeking to unravel. Speculations are already rife that the deceased could have been strangled to death, owing to bruises on her neck.

It is also feared that Ms. Wambua could have been tortured before her demise, with chances that she got killed elsewhere before her corpse was dumped there.

Attention! Never do these Mistakes in a job Interview