According to detectives, the MCA managed to escape but efforts were ongoing to trace him. However, four other suspects were nabbed in relation to the possession of the illegal firearms. 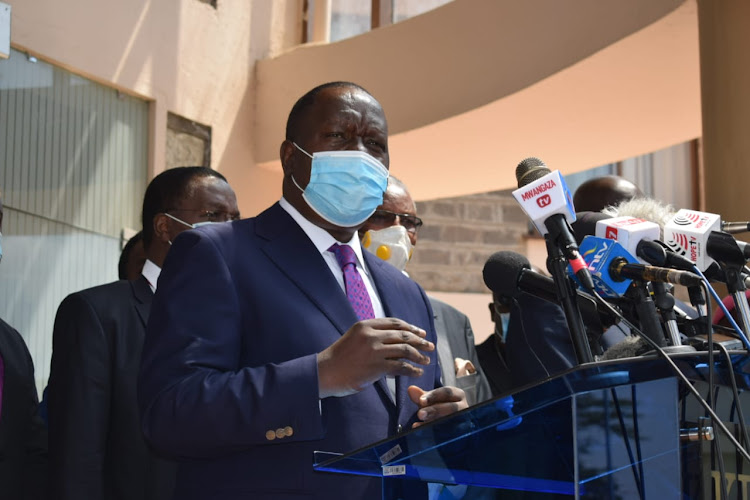 Interior CS Matiang'i in a past briefing. [Source/ The Star]

A member of the Marsabit County assembly is reportedly on run following a Saturday's incident where law enforcers recovered a gun and several bullets from his car.

Eastern Regional police boss Noah Mwivanda added that the ward representative managed to escape with an unknown number of firearms and bullets also.

Detectives also managed to nab four suspects from a vehicle that was registered under the Marsabit government registration number.

The legislator has until the end of today to present himself to the officers, failure to which he will be branded an armed person and a risk to society.

Officers have since been dispatched to the area to investigate claims over illegal firearms being sold openly to the residents.

A week ago, the Interior Cabinet Secretary Dr. Fred Matiang'i announced that the government will begin a disarmament exercise in a bid to repossess all illegal ammunitions.

Addressing the national assembly's Departmental Committee on Administration and National Security, Matiang'i noted illegal firearms were among the biggest contributors to ethnic clashes being witnessed in the area.

The CS further called upon the residents to voluntarily submit the firearms to the authorities, before officers ascended on them.

Following a past call, Matiang'i noted that over 300 firearms were surrendered, although still many others remained among the residents.

The clashes that have been ongoing among various tribes within the region have cost lives for many people, with others rendered homeless after fleeing homes in fear for their lives.

Fist-Fight Experienced in Nyandarua as MCAs Differ over...