The late Nyachae is among politicians whose careers sprouted from the early days of the late President Jomo Kenyatta who was the first Kenyan president after the nation got independence. 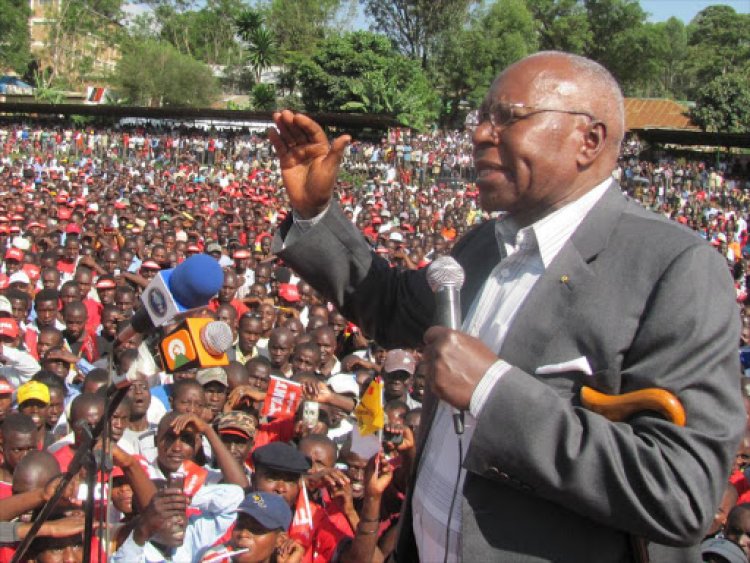 The late Nyachae in a past address to the public. [Source/ The Star]

Simeon Nyachae died on Monday [today] morning at the age of 88 years. The late held various positions in the government, with his political career tracing back to the late President Jomo Kenyatta's reign.

Nyachae was at one time a provincial administrator in Jomo Kenyatta's government before he replaced Jeremiah Kiereini as Permanent Secretary in the Office of the President after Jomo Kenyatta's death.

Nyachae stayed in the late Daniel Moi's government until 1999 when he voluntarily resigned contesting his demotion as a Finance minister.

In 2002 when his boss Daniel Moi was exciting politics, Simeon Nyachae attempted contesting in the race to replace Moi. However, Nyachae grabbed position three after ex-President Mwai Kibaki then Uhuru Kenyatta who took position two.

The late was born in 1932 to a chief's home in Nyaribari, Kisii. His father was among the first coffee growers in the region, an act that placed him among the richest Africans in the colonial era.

The fall out between Nyachae and Daniel Moi began in 1988 when Nyachae was denied to vie under Kanu ticket, at a time when that was the only party.

This was a drastic fall for Nyachae, a man who had risen from a District Officer at Kangundo, defying odds to become a Provincial Commissioner in both Rift Valley and Central Provinces.

However, with Multi-partyism threatening to spit Moi out of politics, the two mended their relationship, ending with Nyachae's comeback as a Minister in Moi's cabinet.

The return gave him a centre stage within Kenyan politics.

Cops on The Look Out for the Missing Keegan Oyugi