Hakim Ziyech's first half goal and Emerson's stoppage time strike saw the complete the job in the round of 16 that began nearly two weeks ago when Olivier Giroud's spectacular strike edged the Blues away from home, a win of 3-0 on aggregate.

Chelsea reached their first-ever UEFA Champions League quarter-finals since 2014 when they dumped La Liga side Atletico Madrid out of the competition on Wednesday, March 17.

Head coach Thomas Tuchel also made history that night. The 2-0 win over the Spanish opposition at Stamford Bridge stretched his unbeaten run to 13 matches in all competitions since taking over from Frank Lampard towards the end of January 2021, the longest unbeaten start by any manager at the club.

Hakim Ziyech's first-half goal and Emerson's stoppage-time strike saw them complete the job in the round of 16 that began nearly two weeks ago when Olivier Giroud's spectacular strike edged the Blues away from home, a win of 3-0 on aggregate. 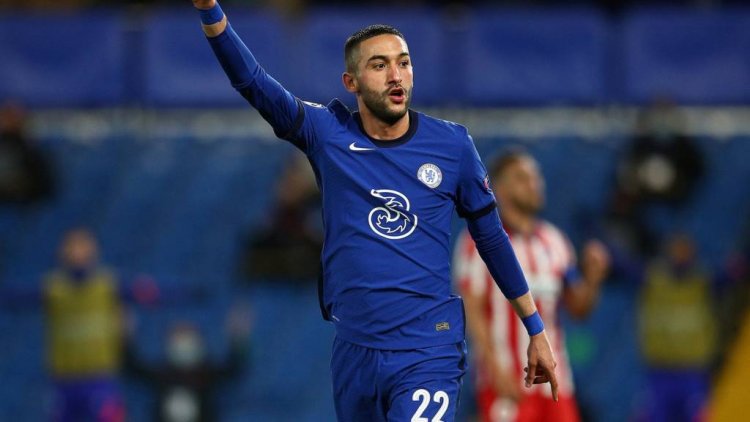 Mason Mount and Jorginho were notable absentees due to suspension and Tuchel opted for a midfield duo of Ng'olo Kante and Matteo Kovacic, with Kai Havertz and Ziyech flanking Timo Werner in the attack.

Both sides started the match brightly, with a goal attempt each in the opening five minutes. It was Atletico though who seemed the hungrier of the two, that ensnared the Blues in their own half as they went in search of an early goal that could draw them level on aggregate.

As the game wore on, Chelsea grew into the game and tried to slow the pace as they drew the Atleti players.

Chelsea however escaped in the 27th minute after Cesar Azpilicueta pulled back Belgian Yannick Carrasco, who was chasing a short back pass from the Blues captain.

The referee waved play on and even after a VAR check, the penalty was not awarded to the amusement of Diego Simeone and the Atleti players.

Tuchel's men then took the lead in the 34th minute with a devastating counter-attack involving the Blues' three summer signings worth nearly £200M.

Kai Havertz released Werner on the wing, with the German's pace too much for the Atleti defense before putting it on a plate for Ziyech to squeeze it past Jan Oblak for his first goal at Stamford Bridge since his arrival.

The Blues came back for the second half with renewed hunger and were the better side for lengthy periods.

Their first attack came just after three minutes as Werner was freed on the wing, bursting clear before forcing Oblak into a brilliant save.

Just before the hour mark, Ziyech tested Oblak in goal again, bending a clean shot towards the top corner but the goalkeeper was at the right place and the right time to tip it over.

Atletico drew close late on as forward Joao Felix sneaked behind the Chelsea defense, but his effort was easily saved by Edouard Mendy.

The Spaniards' hopes of a comeback soon went up in smoke as they were reduced to 10 men after Savic was shown a straight red card for an elbow on Antonio Rudiger.

Emerson then wrapped up the win with his first touch of the ball, getting to the end of a Christian Pulisic ball to score with virtually the last kick of the game.

The Blues join Borussia Dortmund, Bayern Munich, PSG, Porto, and Real Madrid in the last 8 and will also be allowed to play against fellow Premier League sides Manchester City and Liverpool.

The draw will be announced on Friday, March 19.

OFFICIAL: Messi Will Not Continue at Barcelona

Pedro Joins Lazio from AS Roma on a Free Transfer