President Uhuru Kenyatta and ODM leader Raila Odinga will hold a crisis meeting at State House on Tuesday, March 9 two days after the two held a phone call over an alleged fallout. 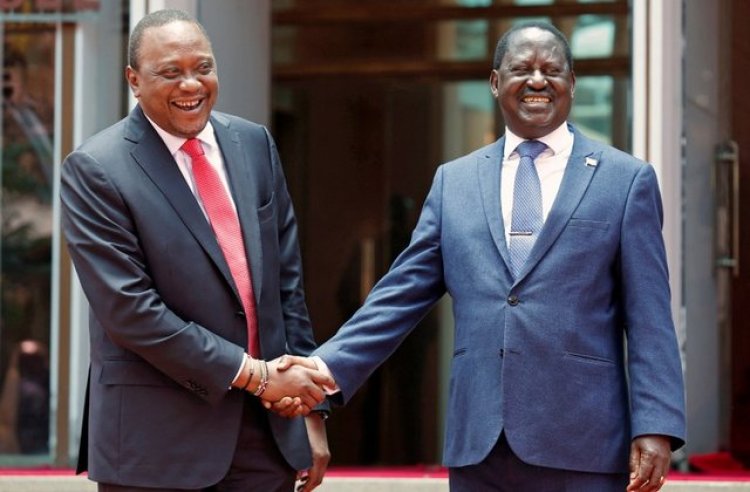 Raila will meet with the former NASA counterparts Musalia Mudavadi(ANC) and Kalonzo Musyoka(Wiper) at the meeting. It is evident that the three leaders have been trading insults at each other publicly as they concentrate on the 2022 elections.

Gideon Moi(KANU), Moses Wetangula(Ford- Kenya), Charity Ngilu(NARC), Wycliffe Oparanya, and Ali Hassan Joho will also be in attendance. Reports allege that Uhuru called his handshake partner Raila Odinga to halt looming demonstrations as Raila`s camp had planned a rally at Kamukunji grounds in Kibra constituency Nairobi to address his followers on the alleged fallout. Suna MP Junet Mohammed however stated that the meeting had been planned before and was not related to the alleged fallout between Raila and Uhuru.

President Kenyatta reportedly cancelled a meeting with MPs and MCAs on Monday, March 8 to prioritise the state house event. The president and Raila were set to meet with the legislators to unveil a roadmap for the BBI. This meeting was postponed to a later date as Uhuru is keen on reuniting the BBI proponents who seemingly appear divided with tangatanga team claiming that the end of the handshake has now come.

Raila`s camp has lately been criticising senior government officials for planning to sabotage the handshake and stop Raila from ascending to power in 2022. However, majority leader of parliament Amos Kimunya confidently stated that they shall celebrate the anniversary of the handshake at a later date.

“Friends This Is Not A License For You To Strip And Remove...