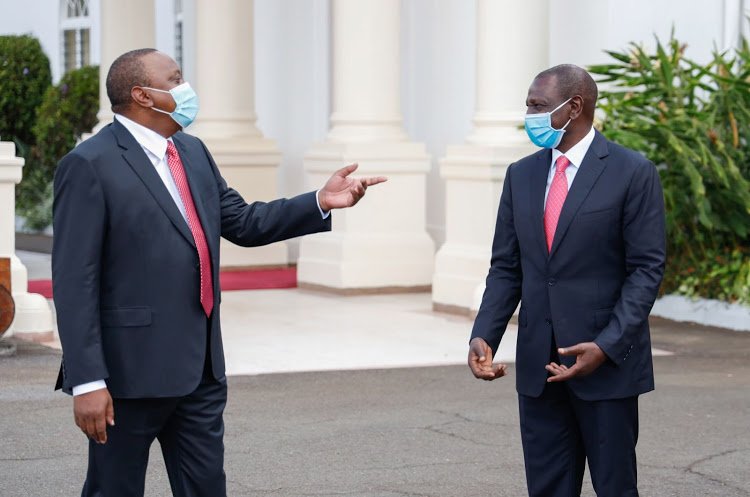 It`s alleged that Uhuru made a last-minute intervention that allowed the Deputy President to continue serving as Jubilee second in command overruling a decision by his allies who have been pushing the agenda to have Ruto ousted from the Jubilee`s party leadership position.

The National Management Committee which is the second most powerful organ with granting authorities over party affairs had last week recommended the removal of Ruto from his mandate as the party`s deputy leader a move they considered to be the best for the well-being of the party accusing the Dp of betraying the party`s decisions.

President Uhuru Kenyatta might have looked at the possible legal hurdles and concerns on the timing of the matter causing him to block the removal of Deputy President William Ruto as the Jubilee Deputy Party Leader. This President`s surprise move has shocked many mainly his close allies and members of the Jubilee National Management Committee which was forced to withdraw the proposal.

The proposed ouster could have completed the purge of Ruto from the rank of the party following similar moves where many of Ruto`s allies were kicked out of influential parliamentary positions. Members of the president`s inner circle claimed that the ouster was poorly timed and would instead give Ruto political mileage to play a victim card and with the handshake being on shaky grounds this move would have complicated Uhuru`s game plan.

Uhuru is also said to have been convinced against the removal of his deputy by the fact that the process could have faced legal actions following a strict Jubilee party`s constitution that protects Ruto`s position which states that as long as Ruto remains the Deputy President of Kenya he automatically assumes the position of the Jubilee`s party second in command.

The Dp allies have come out to state that before he is removed as the Deputy party leader he should first be ousted as the Deputy President of Kenya through an impeachment process initiated by the National Assembly and upheld by the Senate arguing that the NMC and its allies have no numbers to attain a successful impeachment motion.

Why You Need to Have Self-Control

How Mandago Wants ‘Hustlers’ to Pray For Ruto Ahead Of...

Blow To Private Entities After Health Ministry Stops Them...

President Uhuru Sends Matiang’I to the UAE for an Official...

Justice William Ouko: Why Am Best Qualified To Be Chief...