The classrooms, as well as desks and pupils' books, were burnt down in the fire incident that took several hours to put out.

The classrooms, as well as desks and pupils' books, were burnt down in the fire incident that took several hours to put out.

The fire was reportedly caused by an electrical fault that razed down the seven learning facilities, but fortunately, no one was injured.

"Firefighters were able to put out the inferno and the electricians had switched off the electricity. We've spent today (Monday, March 1) morning counselling the pupils and assuring them everything was okay," stated the school headteacher Agnes Muchiri.

She added that all the 2,000 pupils survived but the school has been forced to squeeze them into other classrooms that were not affected by the inferno.

About 300 desks were destroyed, forcing the pupils to share desks until an alternative solution would be found.

Mrs Muchiri urged the Nairobi County government to intervene and assist them in getting other desks and re-constructing the razed classrooms.

Riruta residents however hit out at the fire engines from the Nairobi County Government that took too long to arrive at the scene.

According to them, when the trucks eventually arrived, the rescue team was unable to put out the fire promptly as their equipment was allegedly not in good condition.

Riruta community chairperson David Mukunjura urged the county government to ensure that fire engine services are adequate so that Kenyans in distress get assistance in good time.

The fire comes six days after a student from Kamama Boys High School in Embu was arrested in connection with the fire incident that happened in Mugumo Girls High school.

Investigations established that the suspect sneaked into Mugumo Girls secondary school to see his girlfriend and gave her a cigarette lighter to burn down a dormitory that accommodates 220 students.

Nine students from Mugumo girls were also arrested in connection with the incident. 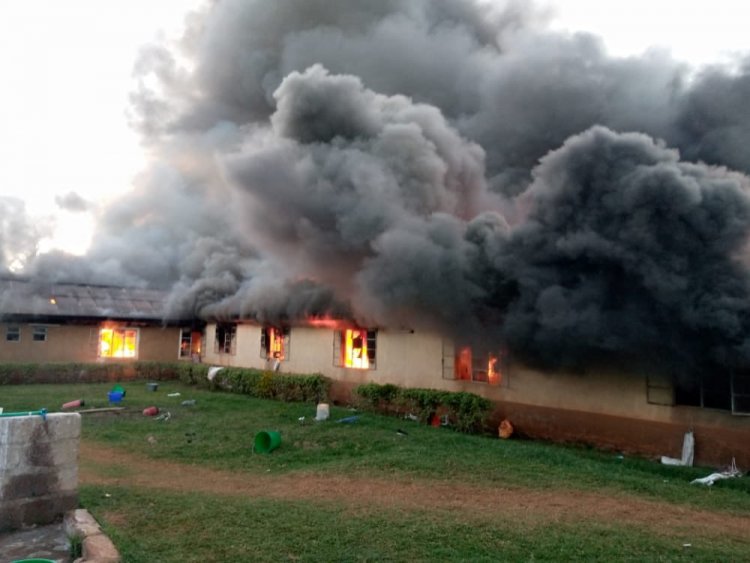