Why US President Biden Tripped While Boarding Air Force One (VIDEO)

Biden clambered up the stairs with swift pace before stumbling the first time. His second and third falls were more grave than the first as he narrowly fell over the stairs but managed to save himself with his left arm.

Social media lit up on Friday, March 19 after US president Joe Biden tripped and fell three times while boarding the Air Force One that was headed for Atalanta.

Biden clambered up the stairs with swift pace before stumbling the first time. His second and third falls were more grave than the first as he narrowly fell over the stairs but managed to save himself with his left arm.

The president got back up, gave his left knee a rub, and sped up the rest of the staircase before turning and saluting US marines who had flown him by helicopter to the airport from the White House. 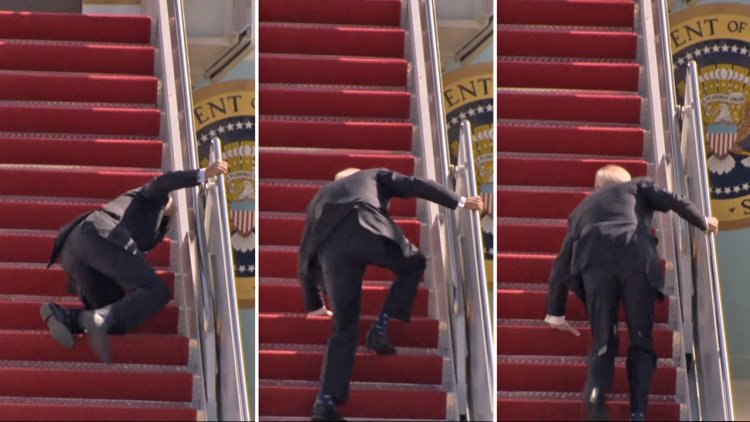 Officials insisted afterwards that there was no damage done during the falls.

The triple fall came as Biden was boarding the aircraft bound for Atalanta from Joint Base Andrews in Maryland.

A White House spokesperson also blamed the windy weather for the incident.

The video of his fall circulated all over social media, roping in former President Donald Trump who threw subliminals online at Biden's fall.

"Pay no attention to the fact that the President of the United States is so frail that he got knocked over repeatedly by a gust of wind. Nothing at all to see here, folks!” he tweeted.

Biden defeated Trump in the US Elections held in November 2020 to ascend as the 46th president, although the latter has continued to claim that he was rigged out.