However, in London Ward Nakuru County, UDA candidate Antony Nzuki emerged as the  Victor as he scored 1,707  votes against his jubilee fellow candidate Francis Njoroge who scored 1,385.

In London Ward Nakuru, the battle appeared to be between President Uhuru Kenyatta and his Deputy President William Ruto, who seems to have reneged on his promise to support him in 2022, the DP had an uphill task of fighting for Hells Gate ward seat that was won by Virginia Wamaitha through Jubilee party`s seat with a total number of 3,995 votes against UDA Candidate Warothe Kuria who got 2,742 votes. 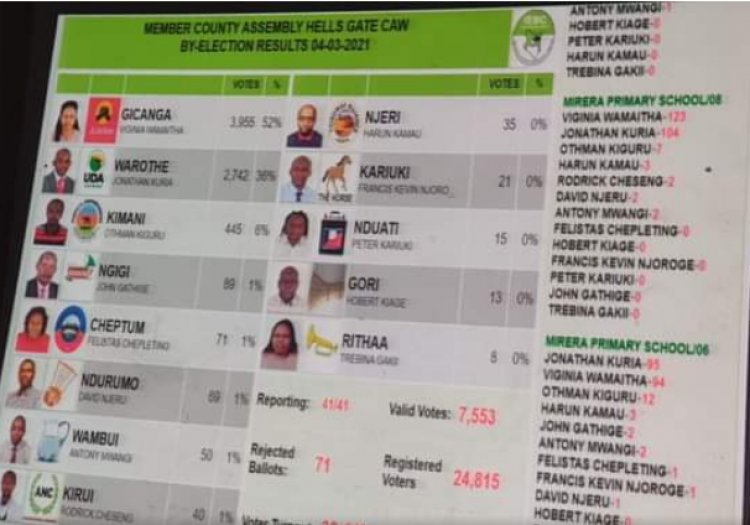 With seven by-elections held in a single day, the DP’s desire to make a political statement backfired on him after he ended up winning one ward by-election even as his Jubilee Party scooped two ward seats.

However, the Elections both in Kabuchai, Matungu, and London Ward in Nakuru were marred with Chaos and violence. This saw several leaders such as Langata Member of Parliament Nixon Korir being on the receiving end after he was brutally bitten by goons and teargassed by the police who were creating law and order in the area.

Also, Four Tangatanga legislators and a senator faced it rough after the police arrested them earlier on Thursday on 4th  in Kabuchai.

The outcome of these by-elections has brought to light a reflection of what might happen to DP Ruto in 2022. Do you think DP Ruto might Win the Presidency Seat come next general Elections?