According to a report by The Star, the car belonging to a businessman in Ruiru joined the motorcade of President Uhuru Kenyatta, soon after the funeral of Juja MP Francis Waititu on Tuesday, March 2.

A motorist was caught doing one of the country's most daring feats after he broke protocol and drove into State House in Nairobi.

According to a report by The Star, the car belonging to a businessman in Ruiru joined the motorcade of President Uhuru Kenyatta, soon after the funeral of Juja MP Francis Waititu on Tuesday, March 2.

He was within the premises of State House completely undetected but was swiftly noticed after he drove past the President's official car inside State House as the Head of State alighted.

State House and police headquarters refused to comment on the matter. However, an official told the publication that the issue had been handled elsewhere and “solved." 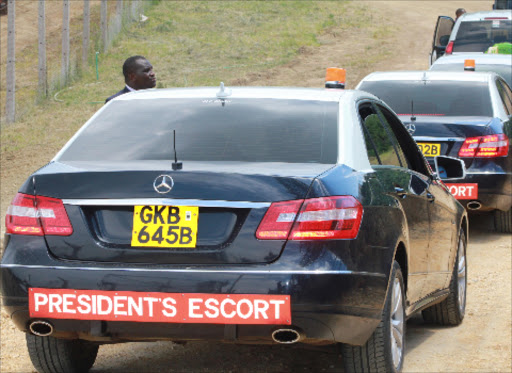 According to officials aware of the drama, the businessman’s driver was sandwiched by the president’s security detail. On approaching Githurai, his car was a few meters away from that of President Uhuru as the convoy cruised towards the city centre.

At some point, the hawkeyed presidential escort team noticed his car and tried to block it but were distracted by locals who had lined up to have a glimpse of the speeding motorcade. It cut through Thika Road, Wangari Maathai Road, Uhuru Highway, Nyerere Road, Processional Way, and into State House.

Once there, the businessman saw a window of opportunity and drive through, thinking he was tailing other cars. However, he was oblivious of the fact that no motorist is meant to overtake cars within State House for security purposes.

He drove past the main entrance where the Head of State alights, which gave him away and led to the security team pouncing on and detaining him and his driver. They were released much later after they had apologized for breaching protocol.

No car is meant to be on the move whenever the president alights or boards his car.

In any presidential escort team, there is the inner, centre, and outer circles. The inner team is the one which knows who is in the president’s car or which car is next to his.

According to an official privy to the arrangements, the team is one of the most important and can do anything to protect the president’s car. No car is allowed there and they are always in communication.

The centre team is meant to keep an eye on which car is following or ahead of the inner one while the outer one clears the way in general.

The lead car is usually the local head of traffic followed by the regional commander. At least five motorbikes lead the way forming a v-shaped convoy, with the presidential escort following suit with at least three cars, which carry assorted weapons with the commander in tow.

Then there are three others with more security men followed by an ambulance and a land cruiser carrying Recce commandos. Men From These Tribes in Kenya Will Never Cheat on Their Partners.

Liverpool have no intention of allowing Newcastle target...

Newcastle's hopes of signing Divock Origi on loan from Liverpool are set to be dashed...